This post is the summarization of the paper “Wider and Deeper, Cheaper and Faster: Tensorized LSTMs for Sequence Learning” by Zhen He, Shaobing Gao, Liang Xiao, Daxue Liu Hangen He, and David Barber. Published as a conference paper at NIPS 2017, Long Beach, CA, USA.

The image above compares a three hidden layers (depth L = 3) skewed recurrent neural network with the proposed model. The tRNN model here has only one hidden layer, but its hidden units are parameterized by a P-by-M matrix rather than a single vector. Furthermore, the interaction between hidden units are captured by the convolution operation (defined later) to take advantages of the tensor representation. According to the authors, the first dimension of the hidden units is “locally connected” in order to share parameters, while the second dimension is “fully connected” for global interaction. This idea will be clearer when we discuss the convolution. In general, the construction of a hidden unit output is computed as following (\(circledast\) is the convolution operator):

This extension to LSTM is pretty straight-forward as each gate is computed using the convolution operator \(\circledast\) in lieu of the standard matrix multiplication. For the higher order tensors extension, the concatenated tensor is constructed by appending the projection (multiplied with weights, added with bias) of \(x_t\) to one corner of the hidden unit tensor. This can be understood as going down the tensor dimension-wise, when you reach a 2D matrix with row size of M, append \(x_t W^x + b^x\) to it. In the same way, \(y_t\) is generated with the opposite corner.

It took me sometime to fully grasp the author’s idea

. Despite that “sometime”, my understanding can be captured in a single image (and now I feel silly). In the case of 2D hidden units, the operation and the dimensionality of each tensor is:

It might sound obvious, but it is easier for me to think of the indices as “selector”. For example, \(A^t_{p, m^o}\) is the element \(square\) of tensor \(A^t\) that is selected by \(p, m^o)\) Usually, the “selector” is lowercase and the total number of element in a dimension is uppercase. In the figure below, I circled in red the “selectors”. 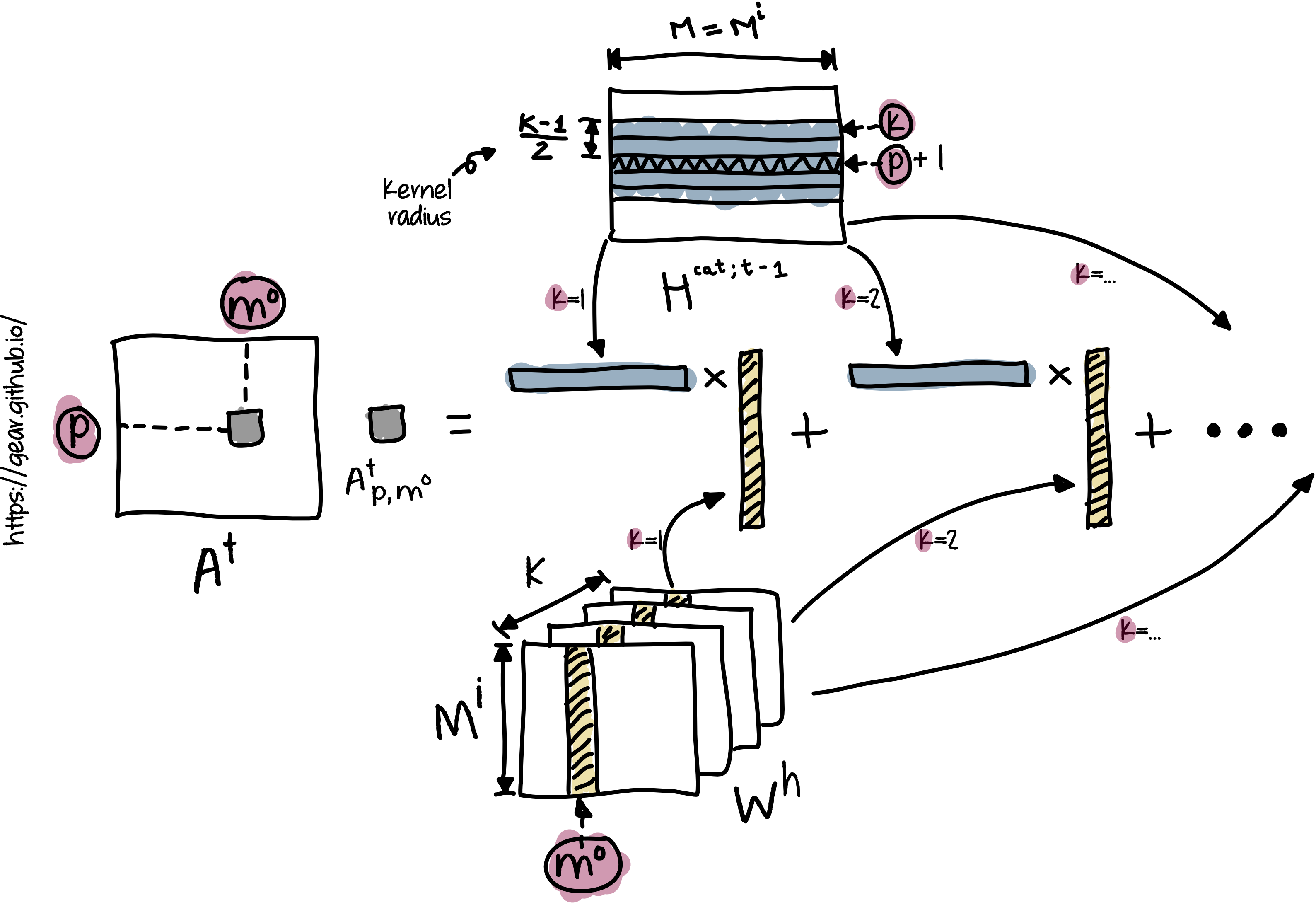 The authors uses three main tasks to demonstrate the effectiveness of their proposed model:

It is true that we can design a “vector” recurrent neural net that works in the same way as the proposed tRNN here. After all, the variables is stored in arrays on our computer. However, tensors represent a concrete way to think about a “block of numbers”, and more importantly, we can define and argue about convolution easily with it. Let’s take image data as an example. The image below shows the popular 2D convolution operation. Tensor representation gives us a concrete way to think about color channels and its corresponding channels in each convolution kernel. Furthermore, notice that we “scan” each convolution channel in the intensity dimension (on the matrices) but not the color dimension. As such, the weights in the intensity dimension are shared. Similarly, in recurrent neural networks, the tensor hidden unit in some sense enables a more abstract representation and allow weight sharing. 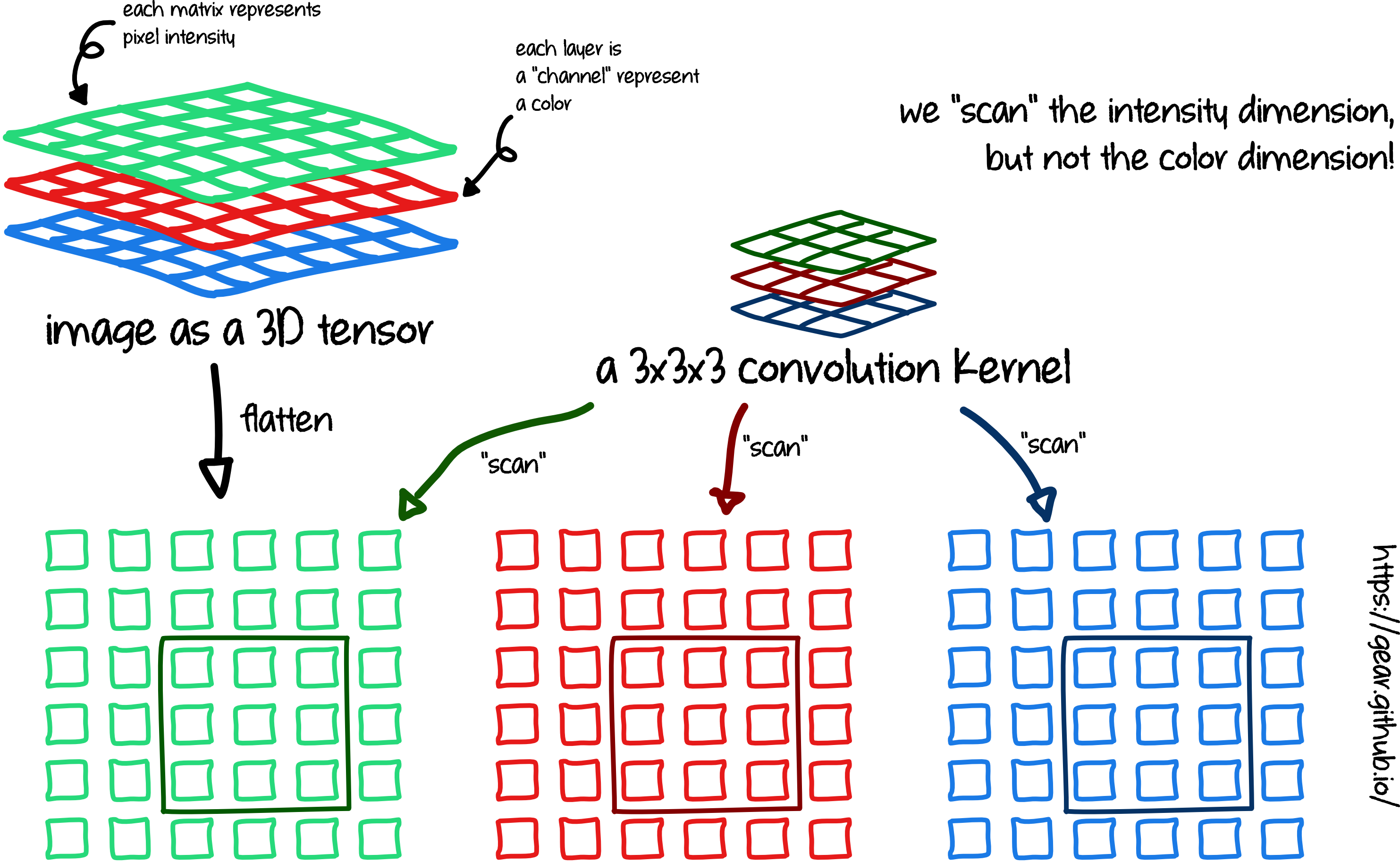 This paper proposes a nice way to increase the structural depth of a recurrent neural network model. Instead of parameterizing hidden units with vectors, tRNN modeled hidden units as tensors for more efficient weight sharing and implicit depth. Such approach greatly reduces the number of parameters in a recurrent neural network while maintaining the depth. tRNN model is also extended to use LSTM module and higher order (3D) tensor for better performance and data abstraction. The effectiveness of tLSTM is demonstrated on three different tasks in which tLSTM achieve state-of-the-art performance with some improvement on number of parameters (minor) and required number of training samples. On the other hand, while the proposed model might improve running time and number of parameters, there was no discussion on the training time and training complexity of tLSTM. It would be interesting to implement the 2D and 3D models to understand the benefit of tLSTM better.

In this post, I wrote about my understanding and commented on the paper “Wider and Deeper, Cheaper and Faster: Tensorized LSTMs for Sequence Learning” by Zhen He, Shaobing Gao, Liang Xiao, Daxue Liu, Hangen He, and David Barber. I left out some details such as Channel Normalization or the constraints on \(L, P, K\}\) These minor optimization tricks can be found on the paper. After this post, I plan to implement this technique to see if it is suitable for my current work. In particular, I would like to see if the training cost can potentially be reduced for a stacked LSTM approach to model product names.